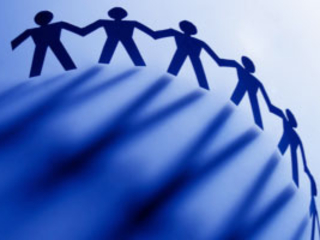 Felipe Filomeno is an Assistant Professor of Political Science and Global Studies at UMBC. On October 23, 2017, I took twenty students from my class Approaches to Globalization (GLBL301) on an intercultural field trip to the Russian Festival of the Holy Trinity Russian Orthodox Church in Baltimore. The field trip was part of a broader project of student civic engagement for intercultural competence, funded with a BreakingGround grant.
In addition to going on the field trip, students have produced the Baltimore Intercultural Calendar, which will become the official calendar of festivals that celebrate foreign cultures in Baltimore City. The project has been conducted in partnership with the Mayor's Office of Immigrant and Multicultural Affairs of Baltimore City.

In 2017, the Russian Festival was celebrating its 44th year. Members of Baltimore’s Russian community founded the Holy Trinity Russian Orthodox Church in March 1919.
On the day of our field trip, we were blessed with beautiful fall weather. At the festival, students enjoyed Russian food (including delicious pastries), watched several folkloric dance performances, appreciated traditional arts and crafts imported from Russia, and even learned a few words in Russian, which one could hear as much as English during the festival.

Students were assigned the task of taking a photograph at the festival that could illustrate the anthropological concept of “cultural hybridization,” the blending of elements from different cultures that is often associated with immigration. In class, we discussed the photos and three reflection questions that students were given in advance of the field trip. The goal of the discussion was to help students understand that different cultures do not have to clash with one another or replace one another; they can be combined and coexist. In other words, cultural globalization is not necessarily a “zero sum game” between cultures.

In their responses to the questions, most students said that by participating in the festival they gained a better understanding of Russian culture. One student was surprised to learn that Russian communities are not all secular. Other students found parallels between Russian culture, on one hand, and Hispanic, Polish, Romanian and Mongolian culture, on the other. Most students also said that the celebration of foreign cultures in the United States is very important, being the country a nation of immigrants. During our discussion in class, students concluded that those celebrations help immigrant communities pass their cultures to new generations, educate the host society about similarities and differences between cultures, contribute to overcome an “us vs. them” mindset, give a sense of community for immigrants and help them maintain transnational ties. Russian doll cupcakes; photo by Morgan Zepp, a student in the course. GLBL301 students at the Russian Festival. Photo: Felipe Filomeno.
I believe part of the mission of universities is to educate responsible citizens, people who can give sensible responses to the social, economic and political problems of our time. By participating in the Russian festival and engaging in a critical discussion about celebrations of foreign cultures, my students had the opportunity to help overcome the political polarization and heightened xenophobia we see today. By creating an intercultural calendar for Baltimore, they produced a tool to promote cosmopolitan encounters in the city.

At a time when American popular appreciation of Russia is not great, it is important to know that, even when geopolitical interests clash, mutual understanding and blending can happen in the realm of culture. One of the Muslim students in my class, who was wearing a hijab in the festival, said that a Russian lady wearing a folkloric dress hugged her and told her “we are all sons of the same God”. I couldn’t be more satisfied with such a cosmopolitan outcome.
Contact the author, Felipe Filomeno, at filomeno@umbc.edu.
0 Comments (requires login)